Order to send oxen to Fort Hall, apprehend men who resist orders and secure settlements or consolidate them. Give no provocation for war.

Major David More
Commanding Weber
Military District.
Dear Brother,
I have issued an order for you to make up the deficiency of oxen, which are called for to go to Fort Hall.
We have not got a Report from all of the hands yet but have learned from Bro Bryant Stringham, that, <the> quantities have not been complied with by a large amount. I have therefore sent an order, expecting that you will get it without failure or delay. I have issued Sundry orders to the Districts, but it is not necessary to wait for them.
The President instructs me to say, that if men resist, or refuse to obey orders like Joseph Davis, put them in irons, with Ball and Chain on Picket Guard, and in no instance permit him or any one else from those or weak Settlements to leave on any pretence whatever, but seek to strengthen by sending more to them.
Let the brethren at East Weber, Fort on both sides of that River, and let the Willow Creek and Box Elder settlements be concentrated, unless they can render themselves secure immediately by forting up.
Be sure that you save the Grain, and all Kinds of Provisions, and proceed with your defences as fast as possible. Major Edward A. Bedell, Indian Agent for this Territory, with D. B. Huntington, are on a visit to your place; you will render them what aid they may need, by assisting to get access to the Indians.

We think that although the Indians maybe a little saucy, that still they will not commit any very great depredations, unless the people continue remiss in taking care of and defending themselves.
You must be careful not to give any occasion, but bear and forbear, and give them no pretence or cause of provocation.
The Brethren should be careful at the same time, not to proceed to extreme measures for fight, and Trivial causes, as is some times the case, and thereby plunging the Settlement into War inadvisedly, perhaps with friendly tribes.
I have no more at present to offer, but remain
Very truly and Sincerely
Your Friend & Brother
In the Covt of Truth
signed D. H. Wells
Lieut General Commanding
Nauvoo Legion 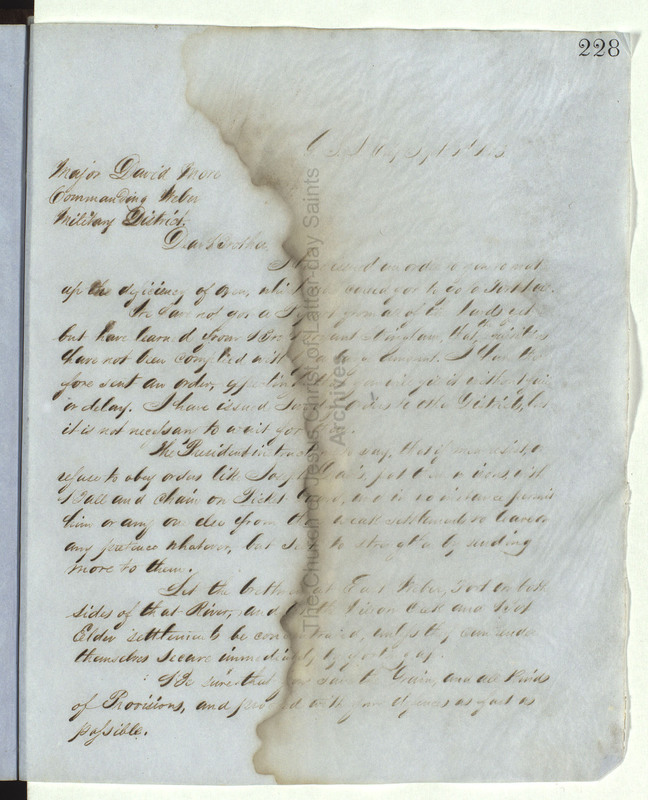 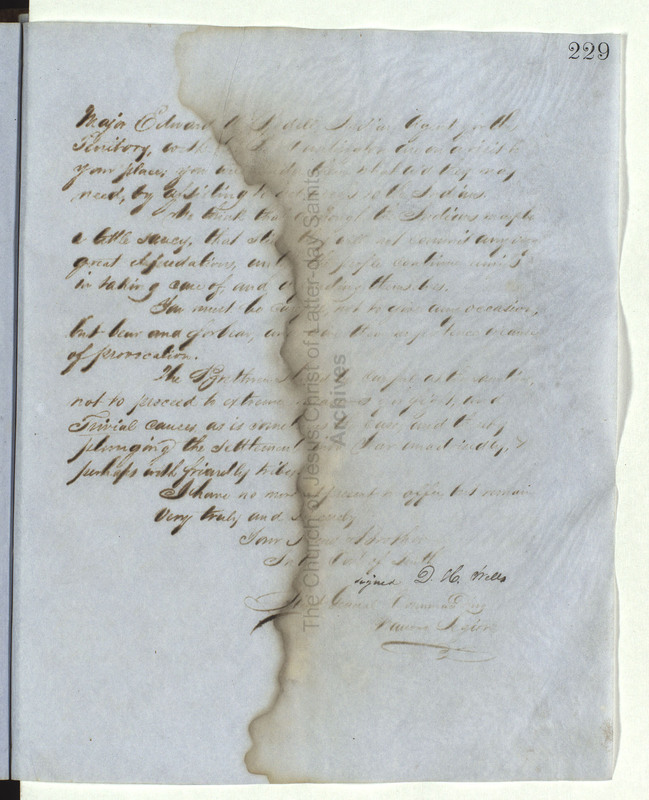