Explanation of the revoking of previous Special Orders and forming a new company. 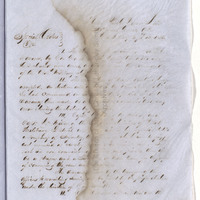 of the Nauvoo Legion, U. T.

Upon further consideration of matter pertaining to that portion of your Command, in Provo City, and on consultation with General Wells, I can see no propriety in multiplying Officers there.  There is more wisdom in enlarging companies than in increasing their numbers, and you will find in the pursuit of this policy, much easier management of your command.  On this account the Special Orders which I herewith send you, revoking the order for an election of a Major, as published.  I wish you to particularly to see that those who profess to be Cavalry, may be on hand so equipped, and also to render Captns. Miller & Wall all the assistance they need in the organization of their Companies.  This we consider most worthy your immediate attention; as a force of this kind must prove to be most efficient that can be brought into the field in Indian Warfare.

It is expected that Captn. Miller will raise a New Company, but Captn. Wall's will be organized by transfers, and without the addition of New Officers.

In the matter of Capt. Miller's Company, it is the wish of Genl.  Wells, as well as myself, that you should consult with Major Markham, as he will have under you the more immediate command over Capt. Miller.  Let these matters be brought about with as few alterations, in the present organization as possible, to prevent confusion or alarm.

The transfer of Captain Miller will justify the approval of Captain Caldwel's election, as well as such other alterations and transfers, as it may be necessary to make.