10 [May 1833] left Aurrilius went to cambius took dinner at E. Pr. D. Watters put up in the town of Granby at Tinkin,s

13 [May 1833] monday wee left Brother Drapers took dinner at the widow Williams then took [[p. 4]] our Jerney stade at Mexecoe at Morton Tavern

14 [May 1833] went to watterton cald at c coson Morton stade at D[..]t Greenes they ware all well at Both placees

17 [May 1833] taried at Ira Patten and Preached at half past five P.M. and Brother David Patton spoke after me

20 [May 1833] monday morning Baptized 7 seven and then <brorthering> left the place <in good sperits> for the north and stoped in the town of govunar and found Joseph T. Works in tolarable helth

21 [May 1833] left the plase for Ogdensburg cold at Depayster left J. T. Works at coson F[e]llows went to Ogdensburg crost the river to Prscot that nite

22 [May 1833] took the steam boat great Britton landed at Kingston and from their to Brother James Lukes [Lakes?] found them all well and in good sperits [[p. 6]]

27 [May 1833] monday went to Loburro had a prair meting in the evning, found the Brotherin in good helth and in good sperits their has been 17 Seventeen Baptized sence Brother Joseph and I left heir

30 [May 1833] thursday went to Brother N. Lake held a meting at one o clock had good liberty in preaching

7 [June 1833] Preached at East Lobourgh at the stone school house then returned to D. W. found Brother James and Denies Lake and their famuley

15 [June 1833] Prached at the schoolhouse west of the Switsur chapiel in the open are [air] at 10 A.M. Brother J. Lot spoke then went to Bowers chapel to attend an apoin[t]ment at 3 P.M. the key was refused and it rained so wee had no meting

22 [June 1833] Preached at Brother D. Wood at 10 A.M. had a good time then went to the water and Baptized 10 and their had a meting the childrin was was brought foried [forward]

June <the> 25 1833 went to my apointment by Bours Chappel but it rain<ed> in so that wee had no meting taried at J. Lakes that week

July 1 <the> - 1833 Brother J. Lake and his famely and my self started for the ohio - N. Fellers and D. Lukes and A. Lake acompened us to Kingston wee then took the steam boat grate Briton and a fridia morning <the 6> wee landed at the head of the Lak[e] [[p. 11]] we then took wagons and went to Bafalow and wee had a good and safe Jorney and then wee put the goods and apart of the famely on board of the steam boat and J. Lake and his whife and the rest of the famely and my self went by land and a thursday [11 July 1833] about 10 oclock wee arived at Curtland [Kirtland] and found the famely and goods safe arived and found all the Brotherin well and in good sperits and found Brother Basley and Brother Avrey and Brother Knobles their--

on Manday 15 - 1833 left Curtlan for mendon Brother Booth and Mr Murrey brought, Brother Bosley and B. Knobles, D. and J. Wood and my slef [self] to Fair Port and Mr Murrey and Brother Booth returned back to Curtlan and wee tarred the next day at 3. P.M. and then took the steam Boat Ohio and landed in Bufulow awensday [17 July 1833] at 12 oclock and tarred a the stagehouse till 10 P.M. [[p. 13]] and then took the Stag for Avan and arived at Brother Eber Wilcox a thursday a bout 12 oclock and attended meting at Brother Bosleys and found the Brotherin all well an in good sperits - a satterday [20 July 1833] went to Brother Bonds in Mendon and found them all well

21 [July 1833] Preached at Brother Ira Bonds to a large - congre[g]ation and Baptized one and then returned to Brother H. Kimbel--

thursday 25 [July 1833] Brother H. K and J. Young and my self started for Lyondstown we arived their safe and found the [[p. 14]] Brotherin all well and in good sperits

August the 9 [1833] - Brother H. Kimbel and myself started for Lyonds and arived ther the next morning and found them all well

17 - went to Lyonds found found them all well

23 went to Springwater Valley found Fererymorze [[p. 16]] well and in a good place

26 went to mendon took dinner at the spring,s in Arvan

27 Spent the day at mendon

3 tusday Preached at the Tailor Chool house in the evening to a large congration Staed with Brother Dickson on over nite [[p. 18]]

Sept 4[th] 1833 an Elder of the Church of <Christ> - Bee it knone to all persons that I. Brigham Young have Mareid Jonathan Hampton and Julia Foster acording to the lawes of the State of New York in the Presents of Abigal Foster Orson Foster and Trew Glitton - held a meting in the evening [On a loose slip of paper is the note: "Jonathan Hampton Aged 22 years Julia Foster Aged 21 years"]

Sept 8[th] 1833 Brother Joseph and I held a meting at the F[u]lkins Choolhouse at and 10 a m and then at 4 P.M - at the G S. Granger Chool house to [a] large and Attive [attentive] congregatian Staied whith Brother Granger

14 Satterday went to Butlar found Mr Votes Peaple well wee ware recived as frends by the fameley Brother J. Hampton went with us from Lyonds, wee Preched to quite a congration and they ware verry attentive - I beleve that the word took affect 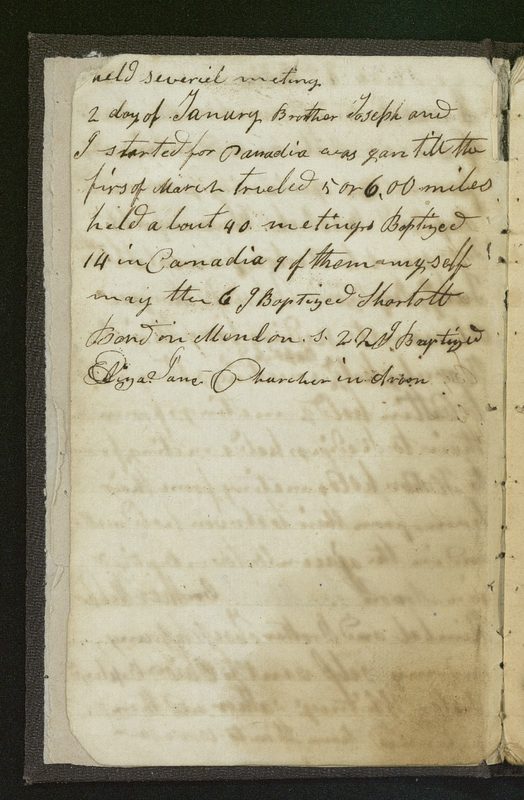 Art thou a brother or brethren, I salute you in the name of the Lord Jesus Christ, in token of the everlasting covenent; in which Covenent I receive you to fellowshi<p> in a determination that is fixed, immoveable and unchangeable to be your frind and brother through the grace of God, in the bonds of lov, to walk in all the commandment<s> of God blameless, in thanksgiving forever and ever.

[sideways on the lower half of this page is randomly written names and numbers as follows:]