An update on the movement of wheat and supplies to the south to secure them from the army. The Wheat Binn will be taken down and sent south and Wells asks about the Mill machinery in Box Elder. The requested accounts will be sent and the evacuation of families continues. 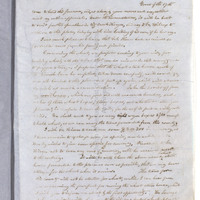 Dear Brother,
Having written to you this morning I have not much at present to communicate. Bro Jno Sharp has loaded his train to day with 575 bushels of Wheat and will start early in the morning. Bro Solomon Angell came in to day, will load tomorrow and start day after.

The Wheat Binn north of the Barn will be emptied this week and taken down so that teams starting from Provo on Monday next can be loaded with it. The Currency sent for is sent by Bro Richard Gibbons, The Mail Carrier the bearer also of this letter. We were very glad of the word not to lend any more money for it had become in some respects rather troublesome. This word relieves us from all anxieties on this subject. I will send a statement next week of Bank Account and also Tithing Office Accounts with the Bank which is now making up. I am also getting a wagon rigged to carry the safe which I trust will be on larger wheels soon and become a traveling institution with the rest of the Territory. Shall bro Kesler proceed to Box Elder and take out the Mill machinery and get it ready to haul away and follow up with bro Kimball's and Bensons as soon as they are done grinding? We are sending less flour in these trains than we would like as we were detained a little in getting flour last week to pack owing to some difficulty in the picks [-] dressing the stones, but the Mill is doing well again now. We also are occasionally bothered about getting nails, quite as fast as we want them, Next week we shall need to keep more teams to do <pu?>rolling as we shall have the use of both Mills hence will not have so many of ours on the road. Bryant, William and Heber Kimball, Geo D. Grant, James Ferguson and several others have gone to the Island. William and James had some trade to settle there. I believe George will be back tomorrow.

Bro Samuel W. Richards turned over 5 Mules two ponies and to day a horse, he also brought up his Accounts to the Office which have not yet been examined.

I think some of the Clerks might be spared & suggested to bro David that they had better be making arrangements to leave. He has his family already out but I believe he is the only one. The boys about the Tithing Store House are very busy and working very hard. They have sent nearly all of their families away and are messing together. I called upon the Bishops to see that the Wards of the City were cleared this week if possible; I send a large Flour Bin and would like to get a place in some shanty to store it if convenient. Your Teams will (all but one) load back with Lumber, that one Hyrum is loading with Household effects.

I remain your Brother in the
Gospel of Christ,