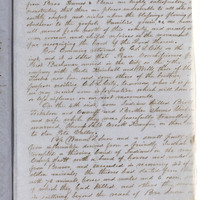 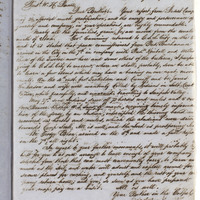 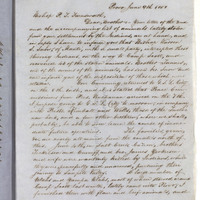 Dear Brother
Late reports from bro's Dame and Bean are highly satisfactory, demonstrating that there are places undesirable to all who value earthly comforts and riches above the blessings flowing from obedience to the gospel. Families, grain, &c. are nearly all moved from north of this county, and nearly every man, woman and child, rejoices in the movement thus far, recognizing the hand of the Lord therein.

On the 4th Inst. some Indians killed Bro's. Teckelson and Curraff and Bro. James Yonkerson & wife, while they were peacefully travelling unarmed, through Salt Creek Kanyon, on their way to San Pete Valley.

Bishop W. S. Snow and a small party, operating from information derived from a friendly Indian, intercepted a thieving band of Indians on their way to Camp Scott, with a band of horses and Mules stolen from Beaver, and succeeded in recovering 43 of the stolen animals; the thieves had started from Beaver with 76 horses and Mules & 6 oxen, some of which they had killed, and others they succeeded in scattering beyond the reach of Bro. Snow & Co.

Some 140 lodges of Utahs and Yampah Utahs lately arrived here from starving through the winter around Camp Scott; they are now en-camped near the mouth of Spanish Fork Kanyon, and notwithstanding they came in nearly starved and I have furnished them several beeves, and several thousand pounds of flour, still many of them are disposed to be a little saucy, and incapable of appreciating true kindness.

Please furnish Nathan Davis and the public hands at work on public works, flour, beef, and such other items or articles as they are customarily supplied with by the Church, so far as you may be able.

All is well.
Your brother in the Gospel