A request for Cannon to work with Thomas Kane to influence public opinion through the power of the press. 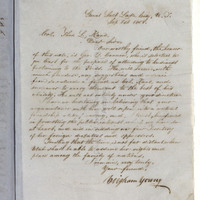 Dear Brother:--
In the progress of events, pertaining to our political affairs, it has become exceedingly desirable that Utah Territory should obtain admission into the Union as a State. In order to effect this object, it is considered of importance to pay some attention to the influence and power of the Press, which for a time past has been unanimous in exerting its utmost Power against us, owing to the absurd abuses in which it has indulged. We have not considered it necessary to waste our time in even answering their slanderous columns, but have left the subject to the trial of time, the great corrector of public opinion, which rarely fails in bestowing justice.

At the present moment there appears to be rather of a reaction in public sentiment in our favor, and we deem it to be an opportune time to make a move in this matter, and render what aid we can in disabusing the public mind, which has so long been left a prey to the unscrupulous lying Demagogue, Priest, and Trader, to say nothing of Editors and their veracious correspondents.

We do not propose to publish a paper, which, as you are well aware, would be difficult to sustain and limited in its circulation; but rather operate through the columns of others -- those wielding an influence and having a large circulation-- not so much by direct correspondence as by open conversation and fair personal representation, cause editors and their correspondents to publish such articles as may be furnished by you as editorial, or otherwise as wisdom shall dictate. You, brother George, have been selected to proceed immediately East to engage in this business. You will report <yourself> to Col. Thos. L. Kane of Philadelphia, and will act under his direction. Enclosed you will find a Letter of Introduction to that gentleman, which you will please deliver in person.

For means, you will have letters to Dr. J. M. Bernhisel, who is instructed to aid you; and you are also to draw upon brother Asa Calkin at Liverpool for funds: you had, however, better first advise with him in regard to his ability to aid you. We are aware, brother Cannon, that this is quite a delicate mission, but relying upon your known character of sagacity, wisdom, ability, and, above all, humility and integrity, we feel that you will be successful and accomplish, thro' the blessing of the Lord, the purposes and objects of your mission.

In all of our intercourse with Col. Kane we have not been able to learn of his means, whether he actually has plenty, the amount he expends in accomlishing his objects, or anything whatever in regard to his resources. He utterly refused to receive a solitary dime for expenses from us, last winter, even insisting upon paying his own board. We would very much like to have you learn, if you can, how he is pecuniarily circumstanced; not to gratify any personal curiosity, but that we may really know his situation with a view of aiding him pecuniarily if there is any necessity whatever for us to do so.

And now, Brother George, May the Lord bless and prosper you, and enable you to realize that He is constantly with you, to aid, protect, and give you wisdom to act well your part for the benefit and salvation of His people.

I remain, Your brother
In the Gospel of Christ