Stoddard's sworn statement concerning the refusal by the Post Office Department to deliver mail to anyone working for Kimball. 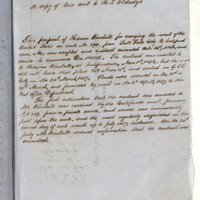 Let Bro. George Q. Cannon have this document. If anything further is needed, please write and let me know, that we prepare the necessary documents.
COPY
Territory of Utah, )
)
Great Salt Lake Coutny; ) S. S.
Be it remembered that on this 23d day of October, A. D., one thousand eight hundred and fifty eight, before me the undersigned Judge of the Probate court within and for the county of Great Salt Lake, in the Territory of Utah, personally appeared Judson L. Stoddard, who upon being duly sworn according to law, upon his oath saith, that in the year 1857 he was employed by Hiram Kimball then Mail conductor on route No 8911, between Salt Lake City Utah Territory, and Independence, Mo., as a mail conductor, and left Salt Lake City Post Office with the mail for Independence, on the second day of April, and proceeded therewith to Independence as speedily as the state of the weather and the condition of the roads at that time would admit. That on the first day of July of the aforesaid year 1857, he called at the Post Office in Independence, for the Salt Lake mail for that month, and was informed by the Post Master, P. McClanahan Esq., that he had received notice from the Post Office Department at Washington, D. C., not to deliver the mail to any person under Mr. Kimball's contract, owing, as it was alledged, to the unsettled state of affairs in Utah Territory, and consequently refused to deliver the mail to deponent.

Deponent further saith that, he informed Mr. McClanahan that there were no difficulties existing in Utah to prevent the free transmission of mails, and proffered to take the mail and convey it to Salt Lake City free of charge, if he (Mr McClanahan) would let him have it; to which Mr. McClanahan replied that he could not let deponent have the mail under any circumstances as he had received orders from the Department not to deliver said mail to Mr. Kimball, or any of his carriers, and he must obey those orders.

Deponent further saith that after he was informed that he could not have the mail, as before stated, he left Independence and proceeded on his return to Salt Lake City, where he arrived on the 23d day of July 1857, and found the Territory in a state of peace and quietness, and that the inhabitants of said Territory had not up to that time, any apprehension of there being any difficulty between them and the Government of the United States.

Sworn and subscribed to before me the day and year first above written. Witness my hand and the seal of said Court this 23d day of October A. D. 1858