Bernhisel is commended for his efforts. The people unanimously voted for a convention to pursue Statehood. The Legislature is considering taxes and Territorial boundaries and affidavits are enclosed. Those who assaulted Governor Dawson have been arrested. 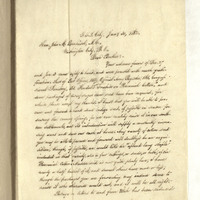 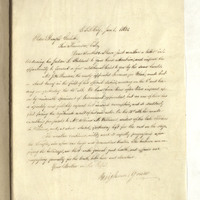 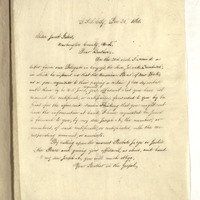 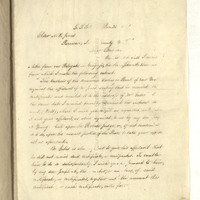 Dear Brother:-
Your interesting favor of Dec 20, has been received, its contents noted, and your exertions to procure a settlement of my accounts, as also your endeavors in behalf of the general welfare of our Territory are fully appreciated by me, as they no doubt are by our people, who are, by past experience, well acquainted with the untiring zeal and patient industry with which you ever look to the interest of our mountain home, And although time may develope that your efforts have been futile, yet we desire mutual satisfaction in reflecting upon our course, You in having faithfully discharged the trust committed to your charge by your brethren, and we in knowing that our wants and feelings have been faithfully represented in the national councils. Thus having placed upon the "powers that be" the responsibility of having refused our just claims and of having deprived us of our legal and constitutional rights we leave to God the result.

The Mass meetings referred to in my previous letters were held in the several settlements throughout the Territory on the 6th inst. The meeting in this City was very largely attended, great enthusiasm and unanimity prevailed; a full account of the proceedings are published in the Deseret News to which I refer you for particulars. So far as I have learned the same general feeling of Harmony characterized the proceedings of the meetings in the other Towns, Cities and Villages the people unanimously voting in favor of a convention, for the purposes before mentioned. Delegates were elected to represent the wishes of the people of the various districts, in said convention. Surely Congress will not be so blind to the true interests of the nation and so entirely regardless of the feelings of our citizens as to treat with neglect and disrespect their wishes when so unmistakeably made known in this public and unanimous manner.

The Legislative Assembly are still in session, the forty days will expire on friday next, they have under consideration the subject of the assumption by the Territory of our share of the direct tax, and will in all probability arrange the tax in that manner. The alteration of the boundaries of our western Counties, consequent upon the alteration of our Territorial lines by the act of Congress which created the Territory of Nevada, the pre-arrangement of the Judicial districts in accordance therewith; The appointment of the U. S. Judges to their districts, and other matters of more or less importance will receive Legislative action before the close of the session.

Enclosed you will find the affidavits which you requested in your letter of Nov. 28th/61 to meet the requirement of the American Exchange Bank. As also the circular from the Post Office Department, which Bro Jones has filled up so far as he could. No 6 and No 7 in said circular are left partially blank to be filled up from the receipt of registration which Br. Jones says he handed to you previous to your departure for Washington. I dont know that the above papers are as full and specific as they should be, but it is the best that could be done under the circumstances, BroJones being in Iron County and Bro Gates in Washington County.

I informed you in my last of the departure of Gov. Dawson and of the brutal assault made upon him at the mail station between the Big and Little mountains, by a band of desperadoes, who not only beat but robbed him of every th[?] he had which fortunately for him, was not much being principally bedding just sufficient for the trip, he having sent his trunk and valuables on the stage ahead.

It is not known how the Governor will represent this matter in the east. He told Sheriff Burton and another gentleman, Mr Golding who accompanied him from the Weber to Fort Bridger, that he entertained none, but the best feeling towards the citizens of Utah, and did not attach blame for the maltreatment he had received to any person but the desperadoes who perpetrated it. So far th[?] is quite right, and as it should be, but we have since heard of his uttering certain threats, murmurings about revenge &c. I regret as much as any person can possibly do, the existence in our midst of such desperate men, nor am I alone in this, the whole community deplore it, and despise their actions, but what can we do suppose we arrest them, try them in our courts for their offences, convict them and they are incarcerated in the Penitentiary or otherwise undergoing the just punishment of their crimes? Some United States Judge is sure to liberate them by virtue of a writ of Habeas Corpus, as was done some time ago by Cradlebaugh and Eckels and still more recently by Judge Crosby. Thus all our efforts to legally rid ourselves of such characters have proved abortive.

The Government probably expended some Fifty millions of Dollars to send an army here the scum of which is still floating in our midst in the shape of bands of thieves and vagabonds, a moral pestilence, a terror alike to the citizen and the sojourner, the Federal Government alone is responsible for this order of things, it must not complain if the "representatives of Federal authority" are among the sufferers.

The weather during the past winter has been very favorable, very little snow thus far, not even enough to give us a sleigh ride. The workmen are busily engaged in cutting the granite blocks preparatory to an early start upon the Temple in the Spring. The work upon the inside of our new Theatre is progressing rapidly and we expect that in a few weeks it will be so far completed as to admit of its being opened temporarily for public performances.

The people generally are in the enjoyment of good health and are availing themselves of the opportunity afforded by the usual relaxation from most kinds of out door labor, consequent to the winter season to enjoy themselves in the dance and such other festivities as their tastes and circumstances may suggest. Peace and joy abound in our midst in happy contrast to the turmoil and suffering that prevails throughout our once happy country.

I learn that the perpetrators of the assault upon Gov. Dawson have just been arrested, and are now in confinement awaiting an examination of that affair.

Your family so far as I am acquainted are well. May God bless and prosper you in your labors for the benefit of Israel,