The military is a wasted expense but they have benefited Utah with money, goods, mules, iron, etc. The Legislative Assembly will meet in the Social Hall. Cannon and Jacob Gates are called as Apostles. 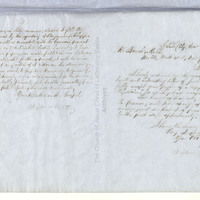 Your interesting letter of July 20, with accompanying slip of Aug. 5, came safe to hand, and the record of your doings met my cordial approval. Our this season's emigration arrived in good condition and spirits, including br. E. R. Young & company who brought up the rear, having started rather late. But the fall was very favorable to late arrivals, the weather having been and still being remarkably pleasant.

The national Utah fever having abated, I shall venture to write more fully by mail than I deemed to be prudent when post offices and mail bags were meeting very close inspection. With the exception of a few troops at Bridger, the army in Utah is concentrated in Camp Floyd where they are quietly pursuing their routine of camp duties, with what particular benefit to themselves or any body else is mainly left for those who sent and are keeping them here to point out. However, we will venture to explain a little. They brought a large amount of money, goods, mules, wagons, iron, &c. &c. articles much needed in our Territory, and a large portion of which had already been scattered among the people, adding much to their comfort and present and future prosperity. How long Government may see fit to retain an army at immense expense in a locality where its services have no opportunity for benefitting the country, we neither know nor care, for though the above enumerated local profits arising from their presence are very convenient, and to the natural man somewhat tempting, still we have prospered without them when we were few and poor, and with like conduct should certainly be able to do so now that we are comparatively numerous and wealthy.

Judge Eckles confines himself and operations very closely in Camp Floyd, with what object or consistency, as a Territorial Judge, perhaps his friends can explain. Judge Cradlebaugh, when last heard from, was in California; and Judge Sinclair has left for the States, as also have Secretary Hartnett and Dr. Forney. Gov. Cumming, agreeable to resolution passed by the last Legislative Assembly, which he states he subsequently approved, has issued a proclamation convening the next Assembly in the Social Hall in this City, a locality affording far greater facilities for Legislative business than Fillmore can as yet, and much pleasanter and more acceptable to the members for many reasons.

Dr. W. Beach, of New York City, on the 24th of June last wrote me a very interesting letter, and kindly tendered me the present of one of his works entitled "Family Physician," wishing me, in case I accepted the present, to inform him how he should forward it. Please be so good as to call upon Dr. Beach, No. 34, West 41st. New York City, and tender him my thanks for his kind note and very acceptable present; and inform him that if he will hand you the book you will see that it is forwarded to me b the first safe opportunity.

The last mail Oct 24, brought a highly interesting letter from our Friend, which I purpose answering at an early date.

On the 23 of October the First Presidency and Twelve met in the Historian's Office, when you were unanimously elected to fill the vacancy in the Quorum of the Twelve, occasioned by the death of br. Parley P. Pratt. Your election has not been made public in our papers, nor as yet in the Tabernacle, lest it might in some way militate against the operations in which you are at present engaged. The choice will be made public so soon as it may be deemed wise so to do. Br. Jacob Gates was, at the same meeting, elected to fill the vacancy occasioned by the apostacy of Benjamin L. Clapp.

I wish you to make arrangements to come here as early as possible next season. In doing so it will be well for you to consult with br. Hooper as to the time br. Andrew Moffat will leave the frontier, and time your movements, so as to cross the plains with him, unless you find a safe opportunity for coming sooner.

Our crops have generally proved good, the weather unusually pleasant, and all things are working together for the welfare of those who are striving to do good upon the earth in their day and generation

Praying for your prosperity in every good word and work. I remain as ever,