Many officers and camp followers are leaving for the states. Tithing is not a test of fellowship. Instruction are given on recording tithing and donations and R. F. Neslin paid on Calkins' account 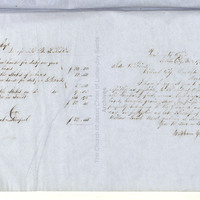 Dear Brother:--
Since my last, of the 3rd inst., no material change has occurred, except in the weather, which has been stormy and cool, though no snow as yet to remain in the valleys, neither hindering much in getting wood from the canons

The army remains as it was, many of the officers continuing to leave for the States as fast as they can get leave of abscence or furlough, and the rest, from accounts, very anxious for like privilege. Other classes of new comers still continue seeking winter quarters outside our borders, quite a company having started east on yesterday. The crusade against Utah having failed of accomplishing the object anticipated by some, and being confessed to have scattered much money here, its interest abroad seems to have essentially died away, consequently the army more and more feel the irksomeness of a wearying monotony in a locality uncongenial to their feelings; and the traders, hangers-on &c., still remaining, are becoming fearful lest their darling schemes result in disappointment to them. This measurably explains the frequent departures, the few or no arrivals, and the prevalent desire to leave. The understanding that Utah is a very poor place for those classes who do not practice exclusively minding their own business, is becoming much more generally diffused, which has and will have a direct tendency to thin off our floating population, and turn the attention of the restless, office, power, and gold seeking hordes in other directions. Be this as it may, it is certain that all things have been, are, and will be overruled for the accomplishment of the redemption of Zion in its Season.
Money is still scarce, goods in great plenty, and purchasers very shy.

Colds were somewhat prevalent, in many cases accompanied with very high fever, until the late change in the weather which has tended to restore the enjoyment of the customary good health.

Until otherwise directed, wisdom dictates that in no case in your Presidency should the non-payment of tithing, either in part or in whole, be made a test of fellowship.

Inclosed, please find a/c between yourself and br. R. F. Neslin, as reported by him; and charge this office $35.95 cash paid by R. R. Neslin on your account.

With a view to their being bound, the better to preserve them and the handier for reference, I wish you to advise Pres. John Van Cott to continue the reports of the Scandinavian Mission, as to tithing, &c. on the sized paper heretofore used, viz.-- 17 inches long by 10 7/8, or 11 inch, wide. Let the names therein be alphabetically arranged, as in the British Mission record.

Please forward the British Mission tithing record once a year, and in the same size and kind of book as that lately sent. Have a column for donations and one for tithing, similar to the form herewith inclosed. Enter all the donations received on all accounts throughout the mission, and all kinds of tithing. Do not send separate sheets of property tithing.

The detailed accounts current I previously wrote for are as follows,, "Tithing and Donation account Current."

I want you to enter on this a/c the total amount of tithing and total am't of every description of donations recd. from each conference in the mission, stating on what a/c the donations have been raised, and to whom and on what a/c the tithing and donations have been expended -- for example take the London Conference, say how much has been expended for rents in the Conference, how much each Elder (give the name) has received, for each purpose, and any other expense that may arise in the conference, and so on throughout all the conferences I can then know how far the tithing and donations raised in a conference pays its expenses, and the several items for which the money has been used. Also send a "Publishing account current" and Emigration account current." The Emigration account current furnished by Elder O. Pratt was very satisfactory, and it is recommended to follow his method in that particular.