A request to ask Little Soldier for information on hostile Indians. 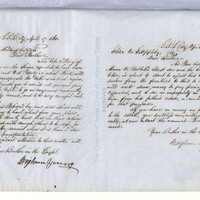 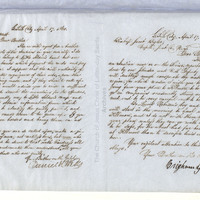 Dear Brother
I learn with regret from brother Alvin of the hostile acts of the Indians in your vicinity. I do not suppose that they belong to Little Soldier's band but are probably from those bands which frequent the roads and prey upon the emigration. I suppose that the civil authority of your courts will take cognizance of their acts, upon the proper complaint being made, and if they should call upon you for aid, I would advise you to raise a sufficient force well armed to search the mountains for the offenders, go directly in a friendly way to Little Soldier's camp and you will doubtless obtain information from which you will be able to identify the guilty parties, and perhaps they will cause them to be given up. If you can get <them,> tye them on horses and bring them in as prisoners.

In case you are so called upon, make a judicious selection of men, not reckless boys, but men who will act wisely, and be sure to treat with kindness all friendly Indians, and make them understand <that> all you want is to arrest hose who are guilty,