A request to elect three delegates to create a State Constitution and finalize the State Government in preparation to be admitted into the Union. A list of proposed delegates is included. 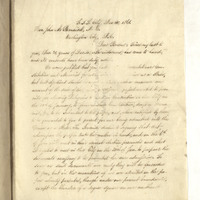 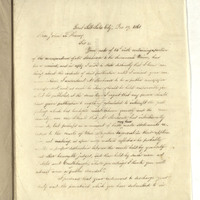 To the Citizens of Juab County, U T

Greeting:-Brethren it has been deemed advisable that Mass meetings be held in each settlement throughout the Territory, on the 6th of January 1862, to organize by choosing a President and Secretary, then and there to elect by vote, of acclamation, three delegates to a convention to be held at Great Salt Lake City, January 20th 1862, for the purpose of adopting a constitution preparatory to the admission of Utah into the family of the Federal States, to memorialize Congress thereon, and do all other business necessary for the full and complete organization of a State Government

Messengers for the people
We propose the following names for your Delegates for Juab County, Jonathan Midgley, Charles H. Bryan, Israel Hoyt,

Messengers for the people

Proposed
Delegates for the following Counties

Millard Co   Thos. Callister, and others yet undecided.