Brigham acknowledges the receipt of documents. He shares his thoughts on Federal Judges, the new Constitution and the election of Legislatures. He lists benefits that Utah Statehood would provide the U. S. 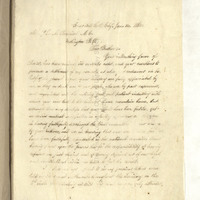 Dear Brother:-Your welcome favors of Dec. 27 and Jan. 3 came safely to hand, and we perused with much gratification. List of Post Offices, 1859, Official Army Register, 1861, Congressional Directory, 1861, Kendall's "Treatise on Perennial Cotton," and some packages of dwarf sugar cane seed have been received, for which please accept my thanks. I trust that you will be able to procure and forward to hand some indigo seed, if possible in season for sewing the coming spring, for we can readily raise it in our southern settlements, and its introduction will supply a constantly increasing want and save our cash at home. Any variety of cotton seed you may be able to procure and forward will doubtless be an acquisition, though, if possible, we would like the "upland long staple" included in that variety, also a few cuttings, or seeds, or both, of the "Perennial Cotton." Madder seed is now quite plenty here; I have nearly a half bushel of it, and several others have more or less; though the packages you are forwarding may induce some to raise it who otherwise would not, and it will be all right.

Postage on letters to and from Utah has been reduced to three cents; but, so far as I can learn, our mail is still tri-weekly, no different notice, it is alleged, having been received from the Department.

I was highly gratified to learn that our good Friend Lieut. Col. Kane was so rapidly convalescing, and that the tedium of confinement is relieved by the presence and care of his noble hearted wife. Please present them both my highest regards and constant desires for their best welfare.

Your reception on new year's day was indeed quite flattering, especially by Secretary Seward. I wonder whether Mr Seward will be like pleasant when our Senators and you as our Representative present our new Constitution and Memorial for the admission of Utah into the family of States, and ask him, reminding him of his speech in favor of the admission of Kansas, to lend us the aid of his powerful influence toward our admission while so many States have withdrawn from and are seeking the overthrow of our Government. We shall see.

When you see them, please present my thanks to Quartermaster General Van Vliet and General Lander for their kind mention and friendly feelings, and assure them that they will ever enjoy my esteem and friendship whenever and wherever they are found doing their duty for freedom in the untrammeled exercise of human rights, not only in our Nation, but throughout the world.

It is doubtful about your obtaining any of the money placed to the credit of the fund for erecting our Penitentiary, still, so soon as the weather moderates, I may deem it best to have one or more Daguerreotype views taken and a copy of the original plan made and forwarded to you.

Chief Justice Kinney is the only one here of the three Federal Judges appointed for Utah, but whether either Judge Flenniken or Judge Crosby think of returning to this Territory I am not informed. I do not know what advantage they can be to us, when our State government goes into operation.

On the 20th inst. sixty five Delegates, elected by the people in our various Counties, metin Convention in this City; and on the 22nd, unanimously adopted the "Constitution of the State of Deseret," five copies of which were, on the 23d, signed by all the members, and attested by the Secretary. By action of the Convention said Constitution is to be voted upon by the electors

on the 1st Monday in March next, at which time the people will also elect 13 Senators and 26 Representatives to the General Assembly, a Governor, Lieut. Governor, and Representative to Congress, for which last three offices the Convention unanimously recommended Brigham Young, Heber C. Kimball, and John M. Bernhisel. It is now supposed, if the people continue as anxious in the matter as they were in regard to the Convention, that the General Assembly will meet in this City on or about the 2nd Monday in April next. That Assembly will probably, at an early period in its session, elect two Senators to Congress, who will, soon after their election, start for Washington with one or more copies [the bottom of the page is cut off] a Memorial for the admission of Utah, &c. Looking at the question naturally, and aside even from the plain view of the right in the case it would seem that Congress should hail our petition with gladness, and at once admit us into that family from which so many are violently withdrawing. In a financial point of view, which just now is a very serious view, it is certainly their best policy to admit us, and save for pressing demands the funds now expended for Utah as [gap in typescript] a correct Constitutional point of view they are constrained to admit us for our Constitution is every whit republican in form and we long ago, from 1847 to 1851, proved our capability for self-Government, at a time when we were comparatively few and weak, and Again, if we are a State we can be Constitutionally taxed to the extent of our fair quota for sustaining the operations of the Parent Government, whereas now there is not the first particle of right, either in the letter or the spirit of the Constitution, to tax Territories for any purpose whatever. Under these and many other weighty considerations, don't you think, and will not President Lincoln, Secretary Seward, other Cabinet officers, and the Members of Congress readily conclude that it is but just and Constitutional right and for the best policy to at once admit Utah into the family of States, and correspondingly act in accordance with so correct a conclusion?

All is right and well in Utah